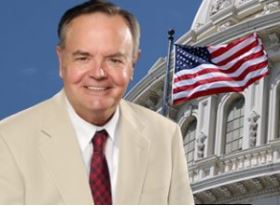 These days, political leadership in Congress is in short supply, along with original thinking. Old ideas are recirculated, along with preordained answers – both often intended to generate press, but not solve an obvious problem. We get lots of heat and little light. But not always.

Last month on the Hill, America saw small steps toward genuine leadership. As Democrats fracture, some brazenly trumpeting socialism (i.e. everything for nothing at the cost of liberty) as others just say no to a border wall that advances national security, smaller steps back toward common sense are appearing.

One such step is represented in a bill offered by Representative Dan Webster (R-FL), H/R. 856, “To amend the Internal revenue Code of 1986 to provide a dedication for certain charity care furnished by physicians, and for other purposes.” The bill is co-sponsored by Congressmen Collin Peterson (D-MN), as well as thoughtful members Mark Meadows (R-NC), Rick Allen (R-GA), Jody Hice (R-GA), Alex Mooney (R-WV), and Bruce Westerman (R-AR).

What does it do? This bill is the pure extract, a simple example of common sense, and one that AMAC’s advocacy team has long supported. In a nutshell, this bill – which has been referred to the Ways & Means and Energy Committees – has been loosely called the “Physician Pro Bono Care Act.” As sounds, the bill would provide a tax deduction for healthcare providers that offer pro bono health care services to low income individuals and families on Medicaid, or CHIP.

The idea has appeal across the aisle, and demonstrates that – even in the storm of conflicted national emotions, congressional dysfunction and a tendency for inertia to win – there are those fighting the good fight, and creating a path to win.

Congressman Webster, who sets a high mark with this bill, noted that, it “ensures our most vulnerable Americans have access to the care they need, from the doctor they choose, at a price they can afford.” To overcome government red tape surrounding the doctor-patient relationship, this bill offers access to doctors for the more vulnerable in our society.

Does this bill solve the escalating costs of health care, end an upward spiral in prescription drug costs, or reverse the injustices and high premiums of Obamacare? No, not in one fell swoop. But what it does initiate is a conversation that will help people – and some in a very big way, using the tax code, empathy for our fellow Americans – especially many older Americans – and the congressional legislative process, to help “as many as seven million” Americans in need.

In an age when win-win solutions are generally put aside for a win-lose solution, this bill represents more than common sense and ready care for those who need it. It represents the best of conservative thinking – a win-win that helps America, working with doctors of good heart to help those in greatest need, and demonstrates how “limited government” can and should work.
AMAC’s President and Founder, Dan Weber, was quick to note, the bill represents movement toward “a bipartisan win-win” that “improves access and choice to healthcare for those of limited means.” Weber added that the bill may help as many as seven million needy Americans, and deserves swift passage.

The bottom line is that, in an age when too many politicians play games, pay off against each other, and play down the power they have to help Americans in common sense ways, this bill offers a way forward. It is an end in itself, and as Dan Weber points out, also a means to the larger end of a functional, cooperative, can-do Congress – that will work with a can-do president. In such moments, there is hope – and passage of this bill would confirm the point.